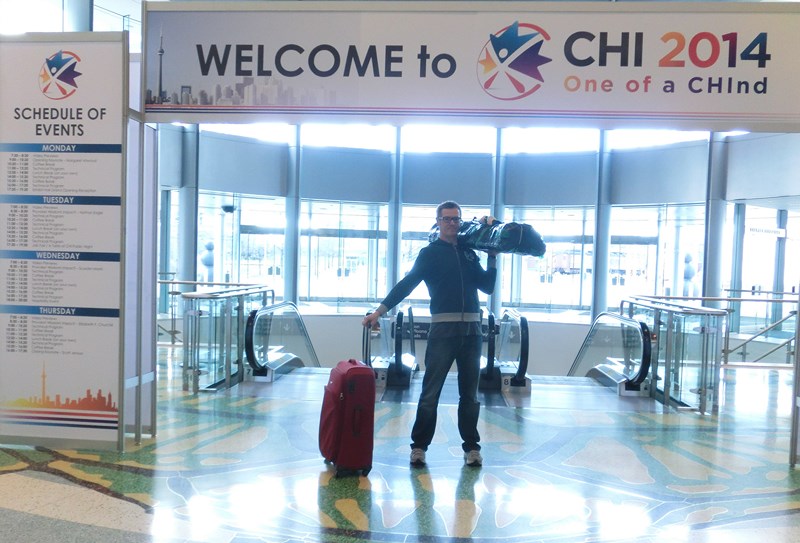 The largest conference on human-computer interaction, the ACM CHI, took place in Toronto from April 28th to May 2nd with this year’s slogan “One of a CHInd”. The Interactive Media Lab Dresden was also involved as Martin Spindler, Ulrike Kister and former student Martin Schüssler presented a full paper and an interactivity (photo gallery). Both Martins gave a talk about their research on Pinch Drag Flick vs. Spatial Input: Rethinking Zoom & Pan on Mobile Displays. In this paper, we compared traditional multitouch navigation on mobile devices with spatial movements for pan and zoom. Additionally, the application could be experienced as an interactive demo called Move Your Phone: Spatial Input-based Document Zoom & Pan on Mobile Displays Revisited. For this they brought a whole setup of cameras and tripods to Canada. Ulrike and Martin Spindler were also student volunteers who supported conference organization.

As always the conference provided the background for impressive, innovative ideas. Talks were given about various kinds of interactions and applications, from large displays and big data visualizations to tiny displays, smart watches and wearable computing. The Canadian author Margaret Atwood opened the conference with a talk about “Robotics in my Work and Life” while Scott Jenses from google talked about “The Physical Web” at the end of the conference. Next year CHI will be held in Seoul, South Korea.