Co-located collaboration around a single display is a well researched subject area of Computer Supported Collaborative Work. In research, mostly interactive tabletops were used, whereas collaboration around interactive powerwalls was not researched as thoroughly, although both have characteristics in common, which are benecial for this use case. For instance, both have a very large screen surface to interact with. The considerably larger surface leads to another possible use case for powerwalls, which is the analysis of large graphs.

Albeit similar characteristics of tabletops and powerwalls, existing concepts of interaction have to be well and thoroughly analized in order to make sure they are applicable for a collaborative analysis of large graphs using an interactive powerwall. It is possible that new concepts have to be introduced in order to fit the needs of such a scenario. As a first step, exisiting concepts of interaction and collaboration will be evaluated and a taxonomy of graph tasks will be presented. Secondly, selected graph tasks are analyzed for potential problems which can arise in a collaborative scenario which involves working with a powerwall. Subsequently, solutions to these problems are presented in the form of new concepts. These comprise a “telescope view” and a world-in-miniature view, as well as workspace areas that are used for a smart highlight of nodes or edges. The details of the prototypical implementeation of said concepts are discussed before giving a conclusion which contains further steps and future work in the area of collaborative work with large graphs using interactive powerwalls. 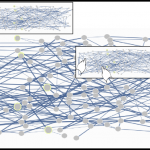 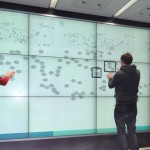 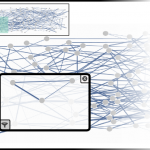