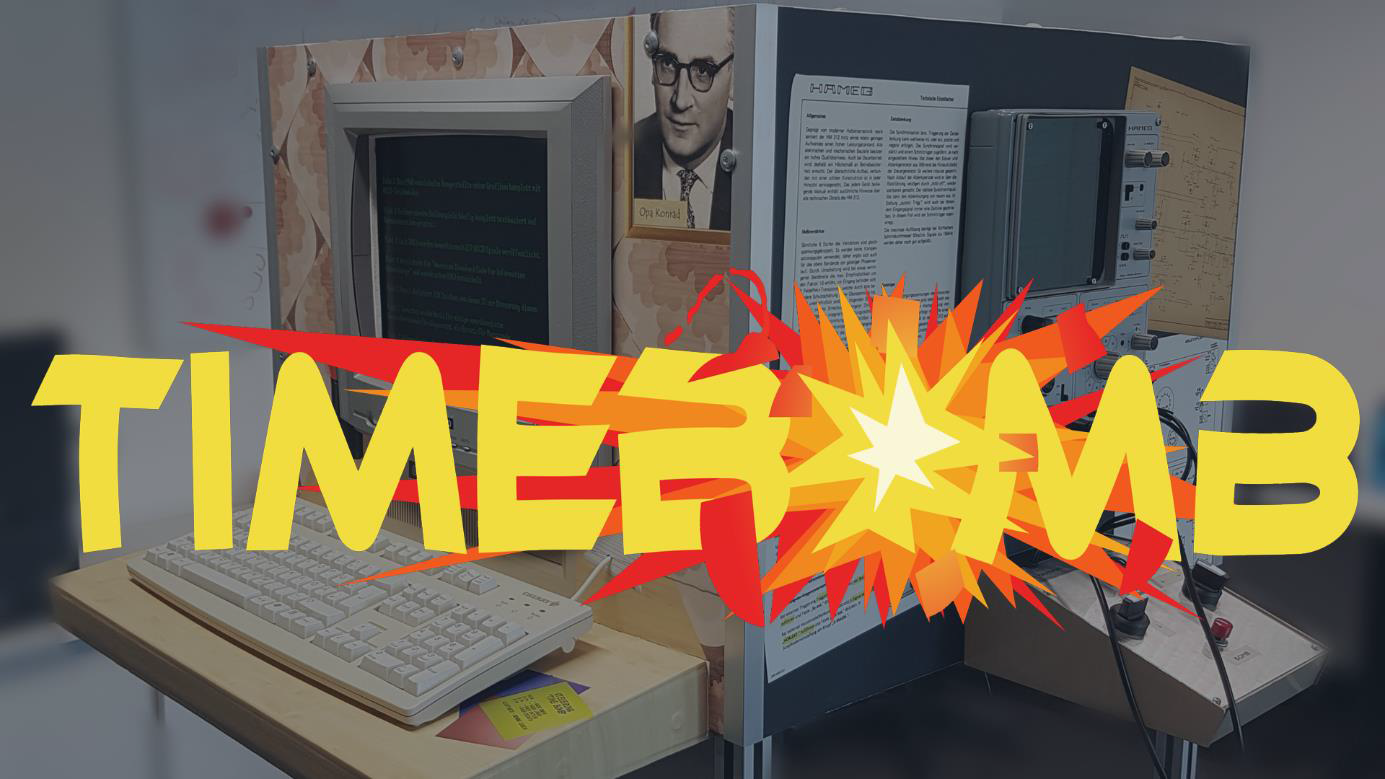 Our exhibit TimeBOMB consists of a cuboid game station, which enables up to four players to compete in an adaptation of the classic game Bomberman. The following sections describe in detail the significance of each represented time period and the dedicated input and output modalities. 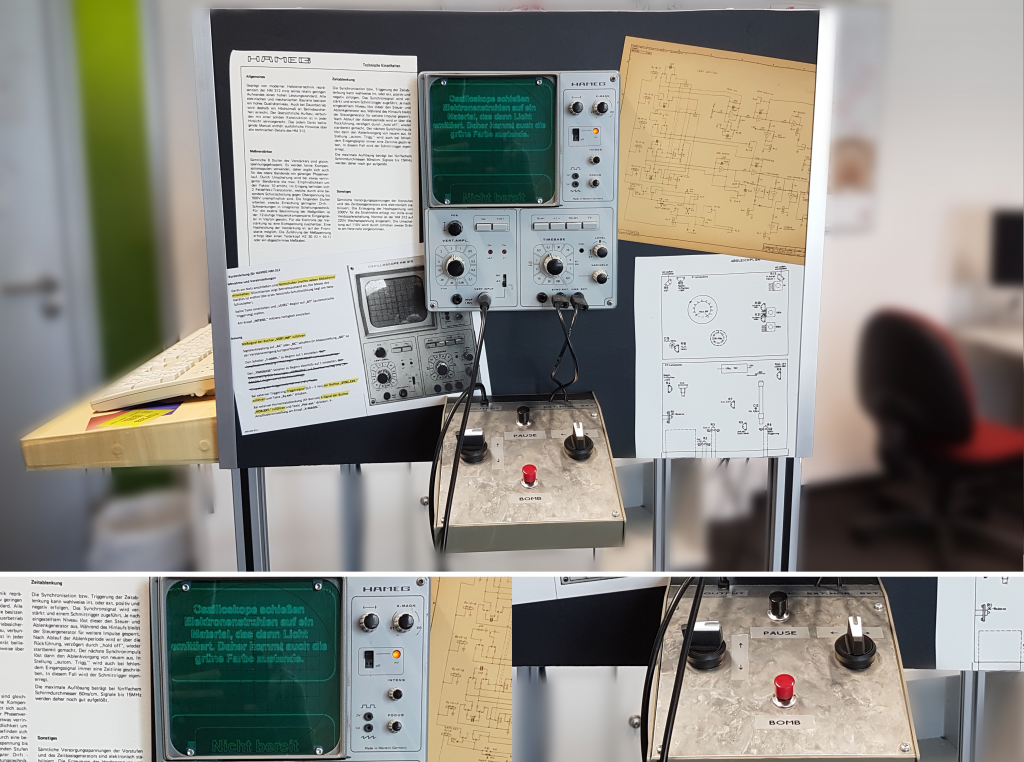 The first side is inspired by the iconic “Tennis for Two”, one of the oldest known video games, which was presented in 1958 in New York. It simulates a game of tennis on an old oscilloscope.
TimeBOMB mimics the input and output conditions of this classic game. A small screen, housed in the body of a real oscilloscope, displays the game scene with monochrome green vector graphics and afterglow, typical for this time period.
The input is strongly inspired by the original Tennis for two controller and consists of two knobs to control vertical and horizonal movement, and a push button to place bombs. This creates an experience that strongly resembles the limited technical possibilities at that time. 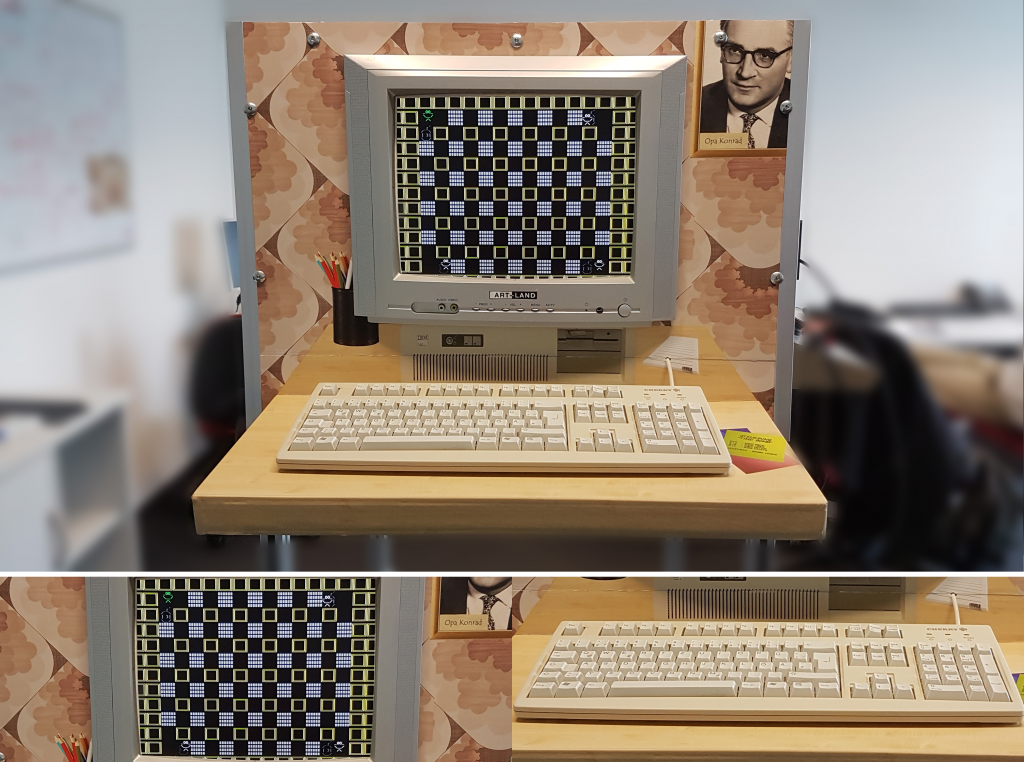 The next significant period TimeBOMB addresses is text-based interfaces, especially text-based games like the famous Rogue, which became an eponym for a whole genre.
For this period, the display shows ASCII characters in a fixed grid, which have one of four colors. These characters are combined to form shapes resembling the player avatars and the environment. The display is housed in the frame of an old CRT-monitor.
The game is controlled by keyboard, with four buttons dedicated to movement and one to placing bombs. 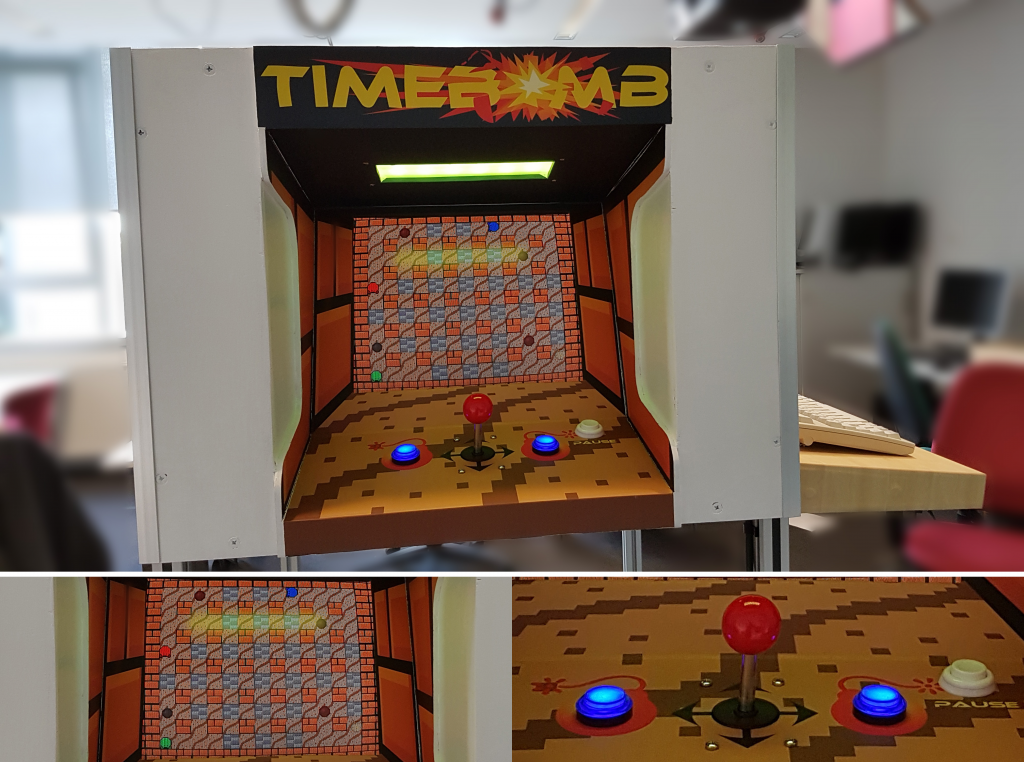 Another important period in the history of video games are arcade halls, dedicated stores filled with several coin operated cabinets and a large variety of games.
The third side of TimeBOMB is dedicated to closely resemble one of those cabinets. The game is presented in colored 2D sprites common for that time period. Each pixel is split into red, green, and blue channels and a scanline and a screen curvature effect are added to invoke the impression of an old CRT monitor.
The input is handled by a large arcade joystick and push buttons, resembling typical arcade machine designs. 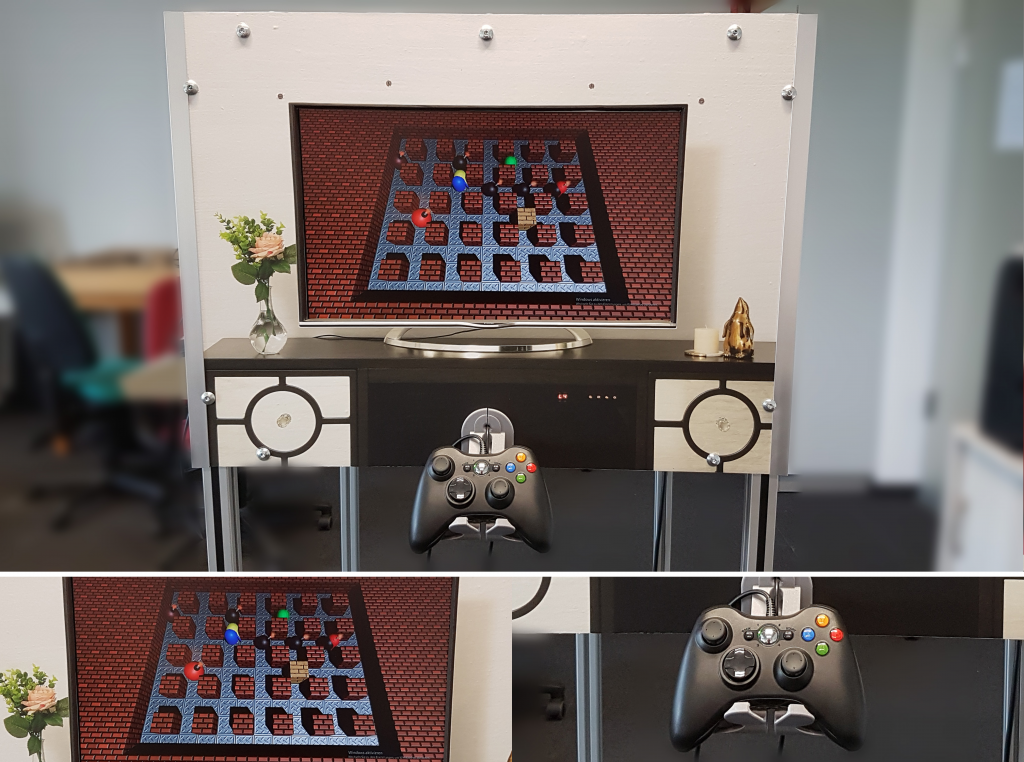 The final side of the station is based on recent home entertainment systems, designed to resemble a living room TV setup.
The 16:9 display shows a full 3D representation of the game, including lighting, particle effects, and detailed textures.
The game is controlled with a modern Xbox gamepad, using an analog stick for movement and one of the buttons to place bombs. This setup of TimeBOMB is most likely familiar to the players and demonstrates the tremendous development of computers and video games since their humble beginnings. 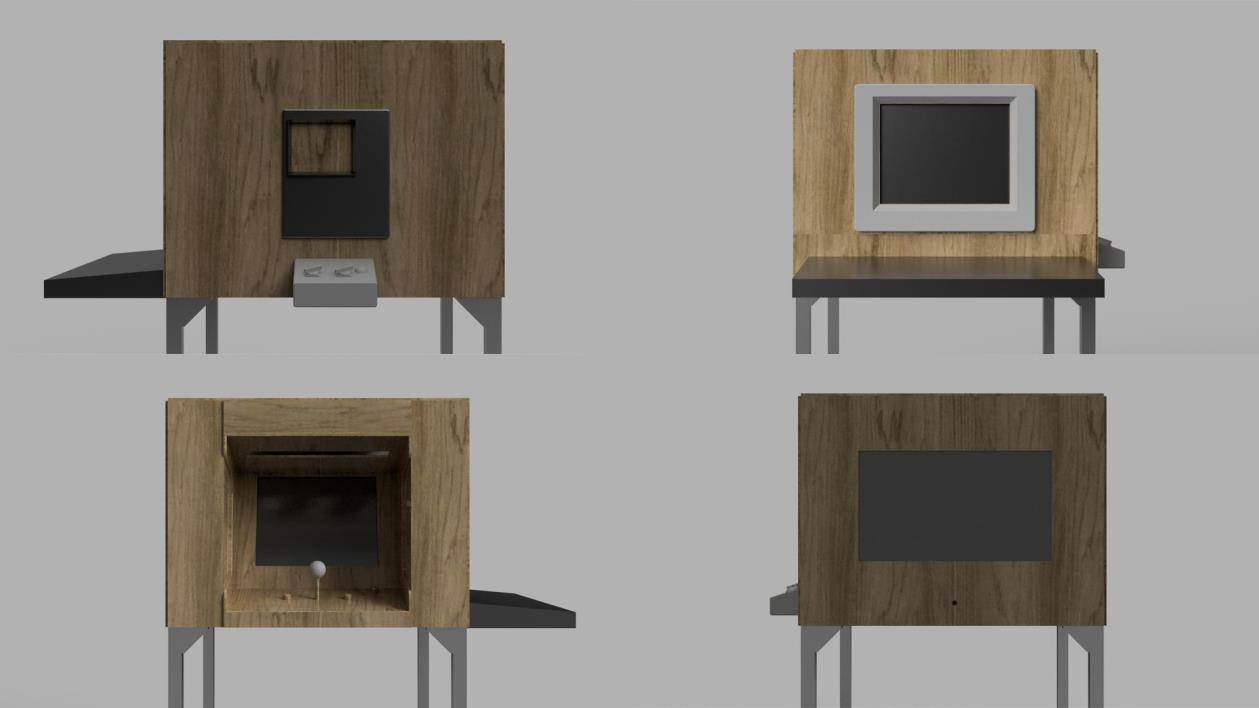 The construction of the station was planned in a CAD application with millimeter precision. All required components and electronic devices were measured and transferred into the digital model. 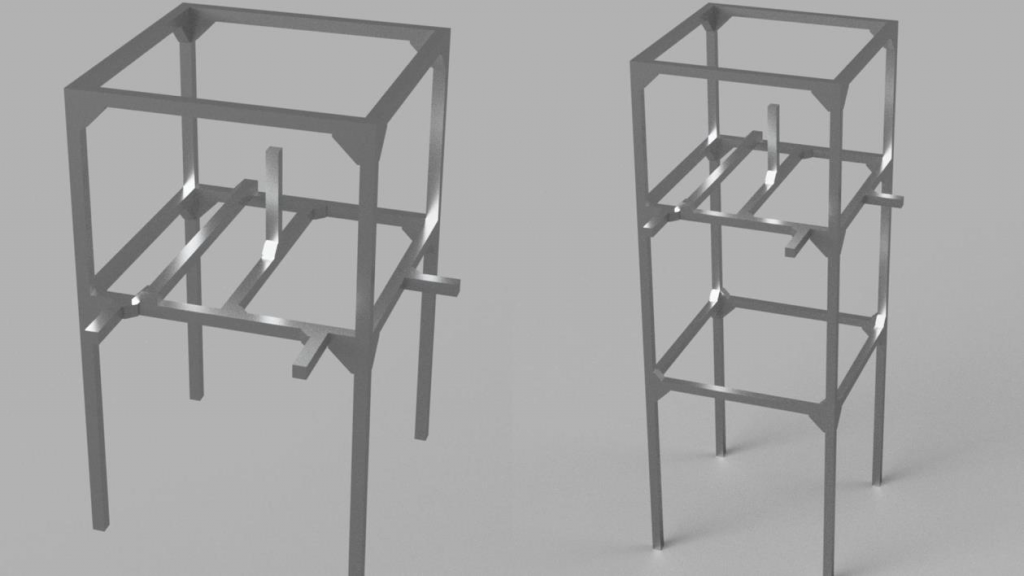 Finally, a metal section frame and wooden covers were designed to define the final shape and look of the station. This digital design process helped to ensure, that all components will fit into the station and how they needed to be arranged. The station can be mounted at a height of either 140cm or 170cm to best fit the exhibition space and the expected audience. 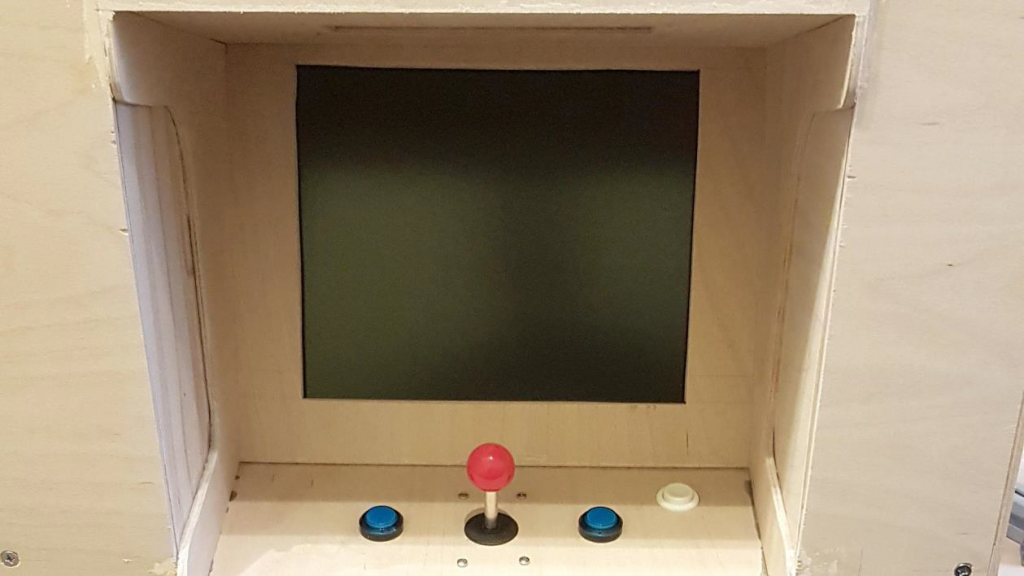 Three of the four faces have rectangular cutouts of various sizes to accommodate the corresponding screens. On the flat beech plywood sheets elements, like the oscilloscope body, the CRT monitor frame, and the rest for the keyboard are attached. The arcade side is lowered into the cuboid to give the impression of a real arcade cabinet. 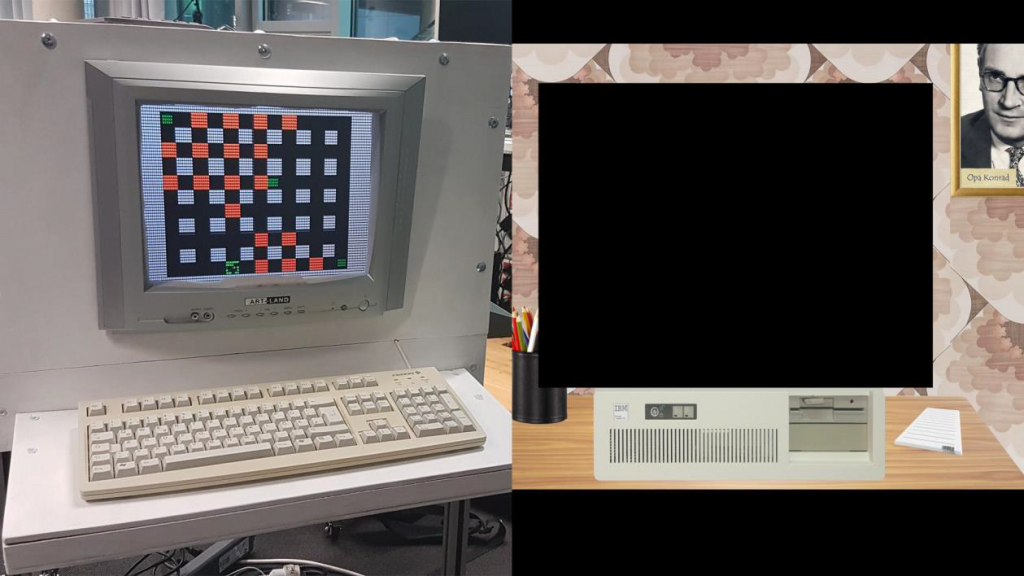 The wooden body was primed white and laminated with plastic sheeting, designed to set the mood for each period. 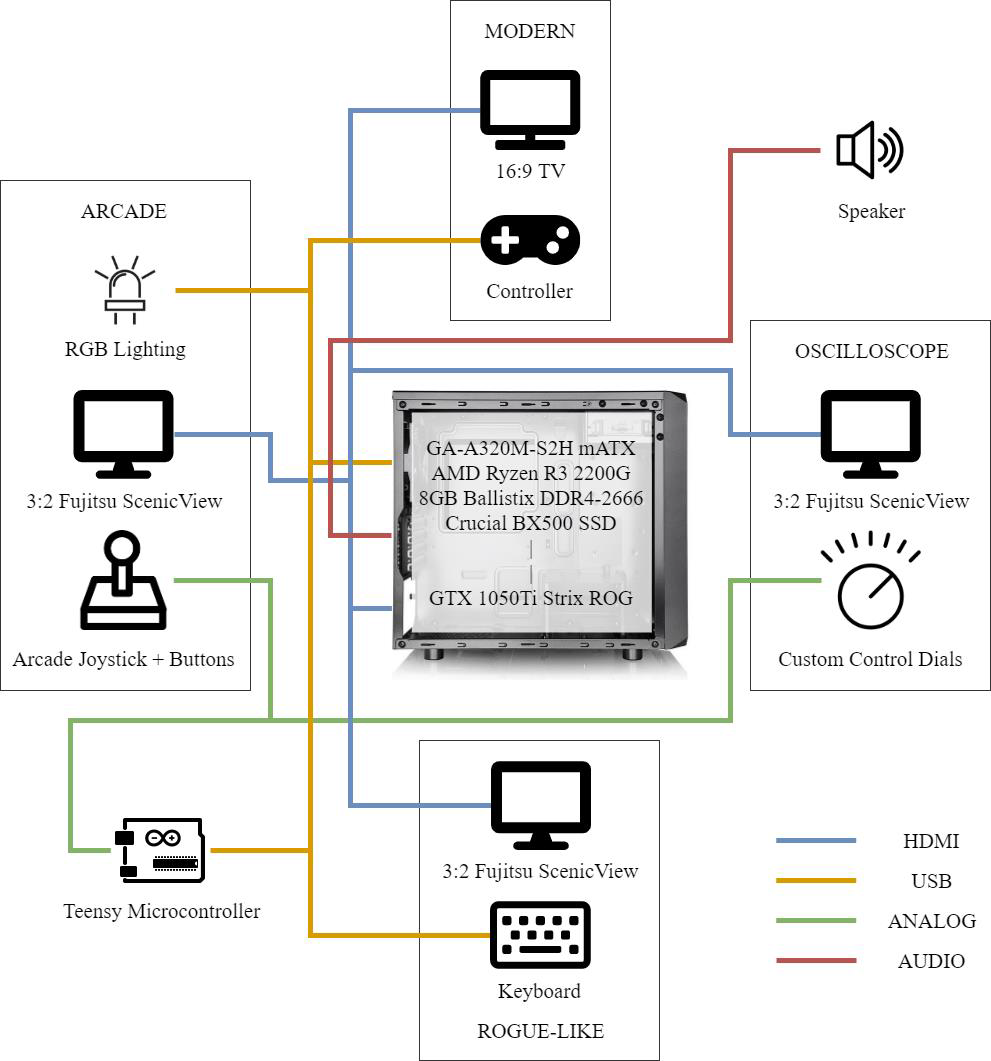 A single PC occupies the interior of the game station with a GPU (GTX 1050Ti Strix ROG) powerful enough to control 4 individual monitors. Other technical specifications can be found in the following Figure.

The TimeBOMB game is closely related to the famous “Bomberman” games. Up to 4 players compete starting in the corners of a rectangular game scene. Every other tile is either a thick wall or a destructible barrier. Each player can place a bomb which will destroy those field elements in the vertical and horizontal direction to create new paths for movement. If a barrier is destroyed by an explosion, it drops an item. Those allow a player to place more bombs at the same time, increase a bomb’s explosion range, or add the ability to kick bombs in a straight line. A player is eliminated if hit by an explosion until only one opponent remains.

In addition to the classic “Bomberman” items, we introduced a special “virus” item. It triggers a negative effect for one random opponent once collected by a player which is typical for their epoch. On the Oscilloscope, the image starts to obliterate, as the afterglow effect, which is typical for the former electron-beam tubes, intensifies. On the Text-based period, ASCII characters and colors are flipped to form skull and crossbones. The Arcade side shows a distortion effect as if a strong magnet is held to the side of the CRT screen when it receives the virus. On the Modern period, players suffer from a reduced framerate, resembling lag resulting from a bad internet connection. The negative effects disappear after 10 seconds. 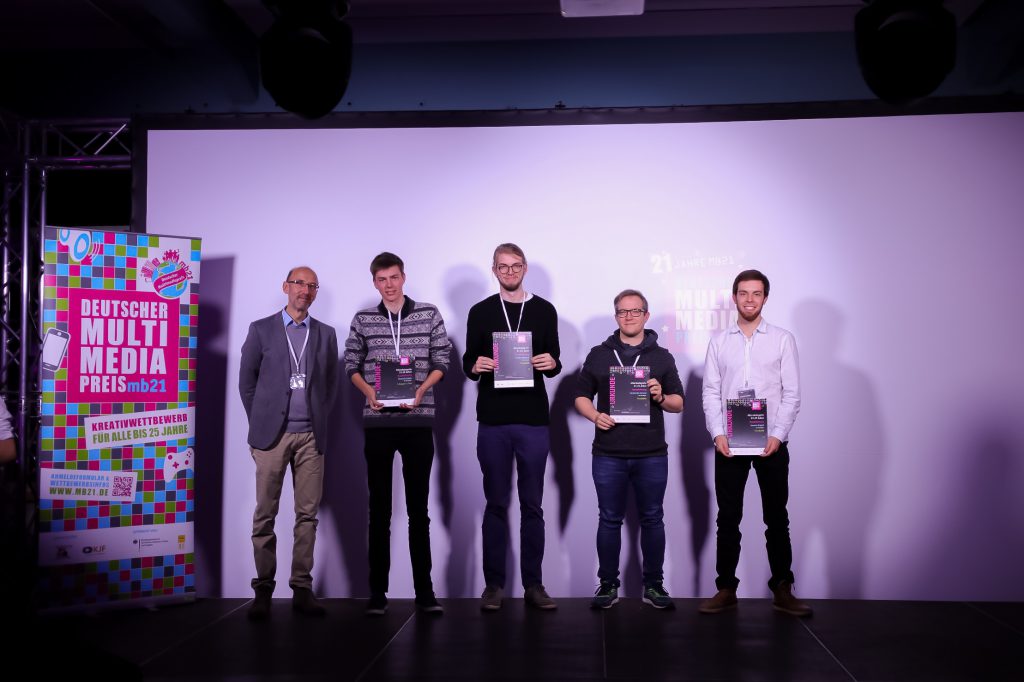 TimeBOMB has created some echo in the media, including DNN, MDR, Medienkulturzentrum, Oiger, TAG24, and YouTube.